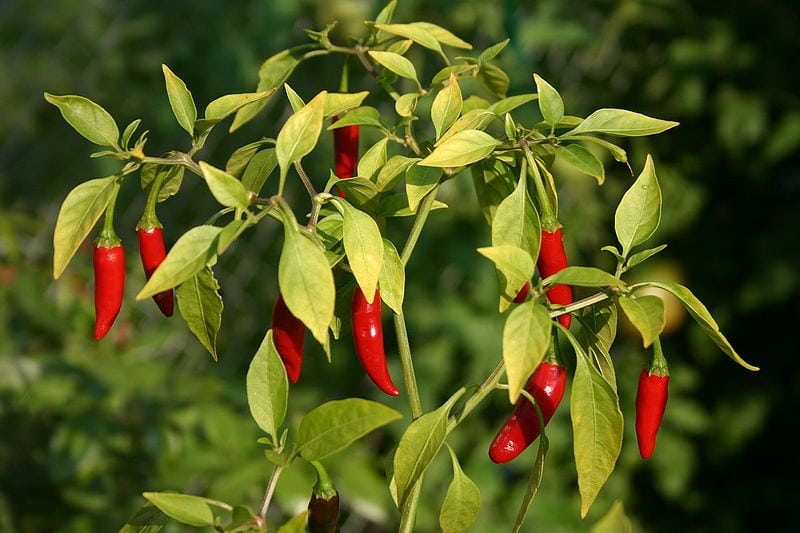 Recently, a girlfriend named Anna asked me the following question : can a pill with cayenne pepper really help lose weight? I think this question may be of interest to many people, so I will try to cover this topic . After all, many of us (mostly women, but also men who love to cook in the kitchen ) are well aware of the culinary properties of red pepper.

But there are only a few people who have heard of the dietary properties of this plant. In fact , weight loss experts said that the cayenne pepper is not only a popular way to add excitement to the pleasant taste and color of your favorite culinary dishes, but it is also a very effective way to encourage the weight loss.

Red pepper called Capsicum is well-known to experts, sometimes referred to as another name for Cayenne pepper. These fruits have several important properties that have been researched by experts and allow them to talk about the appropriateness of red pepper in dietetics. For example, in the book Complete Herbal (1653 AD), written by the author Nicholas Culpeper there is a mention that the cayenne pepper used as a herbal supplement in the middle of the 17th century (*1).

You may have heard that in the more traditional cases, a red pepper is used in herbal medicine as an aid for having a positive effect on the blood circulation and digestion. Red pepper naturally supports the production of gastric juice, it is vital for human health and for a fully functioning metabolism. Red peppers contain a lot of vitamins , including vitamin C and nutrients , so the experts say that these fruits also help a person’s immunity to fight against colds and flu. We can add that the fruits of red pepper contain vitamin A and have a higher percentage of the concentration of carotenoids , flavonoids and antioxidants , including beta -carotene.

In addition to vitamins, red pepper contains capsaicin, the component that gives the peppers a kind of warmth and has a large positive effect for the cardiovascular system. Capsaicin also has the ability to reduce physical pain, helping to destroy the nerve endings , which means lower sensitivity . This component is effectively opens and makes effluent drainage for congested nasal passages on your face.

This is precisely the property that people use in ancient times with colds . When a person is cold, people often suggest eating meals with hot curried . Curry (a mixture of different spices on the basis of turmeric with the addition of red pepper ) is a traditional food supplement in the some countries of the Indian subcontinent , and is widely used around the world.

Now we move on to the culinary properties of weight loss. Experts have concluded that red pepper has a very important property, which proved to be useful for weight loss. The main feature of the red pepper is its enormous potential to burn fat in the body.

Here we are speaking about the ability of red pepper to create a large amount of heat within human body , which gives the metabolism function of the turbocharger . If you are a car enthusiast , then you know what there talking about. If not, then I write other words.

Have you ever noticed what happens to your body when you eat very hot food ? That’s right, you get a little hot, because of the hot food raises your body temperature . And even a slight rise in body temperature leads to an acceleration of metabolism in the body, this rule of physics can be found in school.

This feature of the red pepper noted experts . After you eat very spicy and spicy food , your body temperature begins to rise also . This process is known as diet -induced thermogenesis. There is the process of heat production in the body, caused under the influence of a special diet. When the body temperature is increased in the body accelerates metabolism, and for the effective operation of this exchange takes more energy, so the body begins to burn more calories that were stored in human body fat.

Some studies in western countries have shown that red pepper fruits can have a significant effect on the rate of metabolism. In one experiment, the researchers added 10 grams of red pepper in a food high in fat and carbohydrates. After that , they found that red pepper by its pungency and spiciness increases thermogenesis which helps to burn or oxidize fats contained in the food. Another study showed that if 6 to 10 grams of red pepper added to food had helped suppress hunger. It was tested on a group of men and women , and the results showed that the red pepper actually suppresses the appetite.

Thanks to modern research , the red pepper is often used as an ingredient in various food supplements for weight loss and works in harmony with other natural fat burner . As you know , the red pepper has a very long history as a seasoning , pepper fruits were always widely available and cost- effective, plus have broad health benefits.

If you want to show a little courage and add to your life a little pungent spices to lose weight, then start enjoying the benefits that red pepper can offer.

On a weight loss journey of your own? People like Lebron James make building a good physique look easy – see how he does it! However, the fact is that once you’ve reached your target weight you need to have some plans in place to maintain it. No doubt you’ve been doing some fitness training as part of your daily routine so it’s important to continue on with that. Working on adding some muscle bulk is also an excellent way to keep the pounds off.