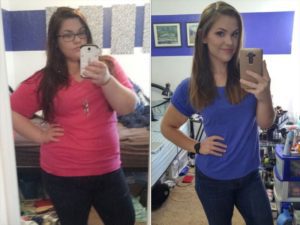 Unkindly dubbed “that fat girl” whilst still at school, Kristina Guice leapt at the opportunity to move cross country to attend graduate school in New York. She determined that this was going to be a new beginning among strangers and one of the things at the top of her To Do list was to finally become serious about losing weight.

She saw the Ketogenic diet whilst browsing through Reddit. There were photos of a woman with a comparable build to her own, showing how much weight she’d lost. Those photos inspired Kristina to try it as it seemed to be something she handle doing. Another thing that attracted Kristina to the diet was the discovery that she could continue to eat cheese!

Most people eat carbs for fuel whereas this diet reduces those carbs and uses fatty fuel sources. Whilst Kristina says she was aware of low-carb diets, she hadn’t really paid much attention to them before. And what she did know about them hadn’t been particularly inspiring due to having to give up bread, something Kristine wasn’t sure she could do. However, as part of her new life and resolutions, she did some research and was blown away by all the things she could still eat. So much so that she decided it was in for a penny, in for a pound.

Still, despite all the things she could eat, such as dairy, she had to make some drastic changes to her diet in order to get her carb intake down to the required levels. At that time, she was eating a lot of carbs – at all times of the day. From breakfast cereal in the morning to nachos and sandwiches at lunchtime, finishing off with pasta or pizza as an evening meal. Vegetables were rarely on the menu because she didn’t like them much. And she ate copious quantities of bread. Which all had to change.

These days Kristina’s diet is a lot different. Her main carb source is leafy greens and the rest of her diet consists predominantly of meat, veggies and dairy, usually cheese. Where once she’d fill up on carbs like pasta, her standard evening meal now incorporates a meat protein source such as chicken cooked in butter to supply the fat, with carbs coming from some spinach.

It didn’t take long for the weight loss results to show and that made her realize making the difficult decision to give up bread had been a definite step in the right direction. A direction she was determined to keep by turning her new eating regime into a habit. In fact, keeping track of her carb intake and visiting the gym are now so much a part of her daily routine that she reckons she would feel strange not doing them. She also says it was incredibly motivating to see the weight loss happening so quickly. After 2 weeks she’d lost 11 pounds.

After grad school, Kristina started an Instagram account called Ellipticalifragilistic to document her weight loss goals. On her 25th birthday she reached her target weight goal of 100 pounds and says the best part of losing weight is seeing her cheekbones emerge. Another thing she now enjoys a lot more is clothes shopping.